The year 2019 marks the 100th anniversary of the creation of what we know as the Federated Church of Chagrin Falls.  The church, with its iconic steeple overlooks the heart of the Village of Chagrin Falls from Bell Street as it has for 146 years.  So on the occasion of this anniversary, some questions come to mind:

·       Why are we observing a 100 year anniversary if the church has been around for much longer?

First, the name.  A “Federated” church is a merger of two or more local congregations, usually of differing denominational backgrounds. In 1919, the Congregational Church of Chagrin Falls and the Disciples of Christ Church began a trial merger that lasted for 10 years, until the federation became official in 1929. These two congregations had been worshipping as neighbors for over 80 years. Both were highly respected organizations of their day.

The roots of Congregationalism are in the Anglican Church in England, and it was introduced to America by the Pilgrims.  Early Congregationalists worked out the democratic ideals that became the foundation of our democracy.  The history of New England was, to a large extent, the history of the Congregational Churches.  This area of Ohio being part of the Connecticut Western Reserve, it seems natural that the First Congregational Society of Chagrin Falls was the first church to be organized here in 1835.  A church building was built on East Orange Street in 1845.

The Congregationalists valued higher education, including the education of women, and founded many colleges and universities, including Harvard, Yale, Wellesley, Smith, and Mount Holyoke.  They were also staunchly anti-slavery, and advocated for complete racial equality and integration.

The Disciples of Christ grew out of two movements seeking Christian unity that sprang up almost simultaneously in western Pennsylvania and Kentucky – movements that were backlashes against the rigid denominationalism of the early 1800s.  One of its founders, Thomas Campbell, was censured by the Presbyterian Church for his inclusive practices.

In 1831, Adamson Bentley, a former Baptist minister in Warren, Ohio, organized a Disciples of Christ church in the nearby settlement that would become Bentleyville, Ohio.   In 1843 the Disciples began worshiping in Chagrin Falls, and in 1853 relocated to a new church building on Walnut Street.  James A. Garfield, the future 20th president of the United States, worked as a laborer in building the structure, and later returned to preach on occasion from its pulpit.

Beyond these foundational churches, there is a third church whose history is intertwined in this story.  The Bible Christian Church, a denomination founded in England, was organized in Chagrin Falls in 1846. It was made up of English families and was frequently referred to as the English Church.   The Bible Christians built a fine building on our present 76 Bell Street site in 1873 in a Georgian cross design.  The denomination disbanded in 1884 and the local church became part of the Congregational Church.  The Congregationalists enlarged the Bell Street building in 1885 and relocated there from East Orange Street.  Much of the 1885 structure remains today, including the iconic clock tower and spire.

So in 1919, our present Federated Church was born as a result of the federation of the Congregational and Disciples of Christ churches.  Each of these churches had also experienced mergers in their pasts.

So why celebrate this 100 year anniversary?  To remind us that our history is one of people of faith coming together and overcoming their differences.  To reaffirm that there is more that unites us than divides us.  To reflect that many of our current values are reflected in the historical priorities of these ancestral churches:  inclusion, unity, equality, and self-governance.  To remember that through history, God is still speaking.  So although our church’s history in the village dates back 184 years to 1835, and our church building to 1873, the 100th anniversary of the creation of the “Congregational-Disciples Church Federated” is a milestone worth noting!

Much has changed in Chagrin Falls and in the Federated Church in the last 100 years.  The old Congregational and Disciples churches are gone, but the church on Bell Street, the oldest in the village, has been expanded on three different occasions – the Sunday School wing in 1929, a new sanctuary in 1965, and new offices in 1997.  In 2000 the Family Life Center was opened on 40 acres in Bainbridge Township.  Today we also celebrate the completion of the renovation of our beautiful sanctuary into a more open and flexible space for worship and music, and the complete restoration of the historic Schantz pipe organ that supports the beloved music programs that are such a rich and vibrant part of our worship.

As a federated church, Federated did not really belong to a larger denomination, so it officially affiliated with the United Church of Christ in 1961, just four years after the UCC was established.  The UCC is a modern progressive manifestation of many of the historical core values of this congregation.

Most importantly, we celebrate a church rooted in history yet looking to the future, where community, inclusive welcome, love, social justice, and service are timeless values – where we “Gather in Spirit and Serve in Love”. 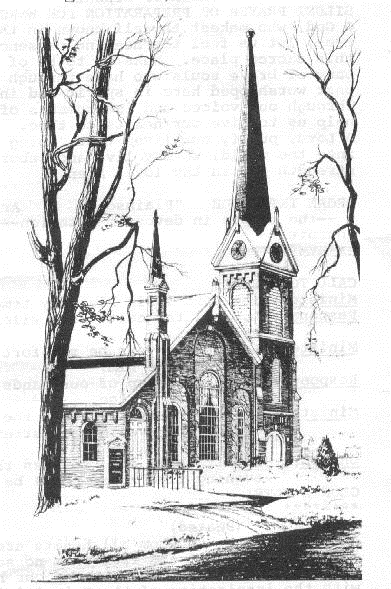